*We build radiators for all years of Ford vehicles. Please contact us to learn more.

Ford muscle cars counted among their ranks some of the better all-around performance machines of the muscler era. “Total performance” was the companys slogan for 1963, and that’s what a 425-bhp 1963 Ford Galaxie 427 delivered.

The 1966 Ford Fairlane 427 could hold its own with any muscle car but was simply outnumbered. It’s “shaker” scoop throbbing with power, the 1969 Ford Mustang Mach 1 428 Cobra Jet was the muscle car Mustang fans waited for.

Ford’s exit from the golden age of muscle was sudden and complete. By 1972 the Mustangs 429 option was gone but was still offered in the Ford Torino.

Even today the Ford Mustang remains one of the top selling modern day muscle cars. 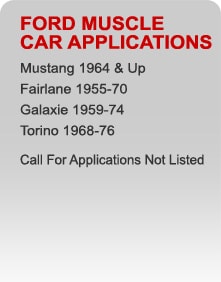